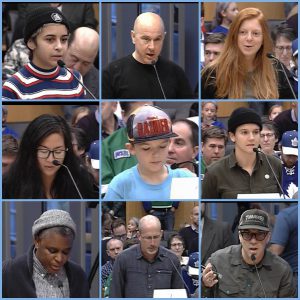 Yesterday the skate community showed up to City Council chambers and testified to the value of SeaSk8 to our community. We called out that there is no clear budget identified for the replacement park, and that it’s problematically conflated with a maintenance building and an obliquely defined set of “public amenities” in the current MOU. We pointed out that in the past, finding a site has taken up to three years for previous incarnations of this very park, and that gap in service amounts to certain death for the community that relies on this skatepark for everything from skateboarding, to self-esteem, personal growth, mental health, and physical fitness. We also highlighted that this is the fourth SeaSk8 which, in itself, begs questions about why Seattle Center is so allergic to permanence when it comes to skateparks.

Despite all that, Seattle City Council Committee on Civic Arenas approved the MOU and moved it to be approved by the full council on December 4th. They did this without even acknowledging the comments that were made by skatepark advocates, or that they registered our complaints at all. Committee chair Juarez was even dismissive, by making a statement about how non-binding the MOU was, and that there will be changes made down the road. Councilmember Juarez clearly has no understanding of what this community has been through. King 5 seems to be on board with the effort to dismiss skaters by characterizing 10 skatepark advocates in a group of 40 speakers as “a handful“. Is this what Seattle Center Executive Director Robert Nellams meant back in 2010 when he told the City Council that he thought skaters in Seattle were getting a “raw deal”?

Unsurprisingly, The Stranger comes to the rescue with the first (and currently only) piece focused on the fate of SeaSk8 and fairly represents the issues being raised by the skate community.