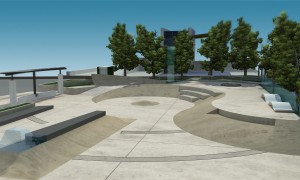 The Seattle Center issued a press release last week announcing the ground-breaking down at the SeaSk8 site.  What is not mentioned here, is that the park is one month behind schedule, and is now slated to open in July.  Let’s hope that’s the extent of the slip.  Grindline is working with some new materials and the park’s design is pretty out-there.

Seattle Center has started construction on a 10,000 square foot, state-of-the-art Skate Park.  The project includes improvements to one of the main intersections leading into the campus at 2nd Avenue and Thomas Street. It is expected to be completed by early summer.

Seattle Center worked closely with the skate board community on design of the Seattle Center Skate Park. It will feature practical and artistic elements, with skateable streetscape features and outstanding usability. A non-skateable divider will be built between the park and the campus, and it will be open daily (for daytime use only).

The Seattle City Council mandated construction of the Seattle Center Skate Park after property housing the former Skate Park was sold to the Bill & Melinda Gates Foundation for development of its world headquarters.  The project was funded by proceeds of the sale and other City capital funds.

The placement and design of the Seattle Center Skate Park were vetted through an extensive public process including public and Skate Park community meetings, determination and notice of non-significance, and published public notice, comment period and appeal period. The Park also was part of the environmental review associated with the Seattle Center Century 21 Master Plan.

The Skate Park site contained a pavilion built for the 1962 Seattle World’s Fair. It runs along Thomas Street southwest of KeyArena.  Mechanical and catering facilities for KeyArena are housed below site, and so the skating area will be built up above the ground (as opposed to a bowl type design).

Attached are images of the conceptual design. For more information on the Seattle Center Skate Park and other activities at Seattle Center, visit www.seattlecenter.com