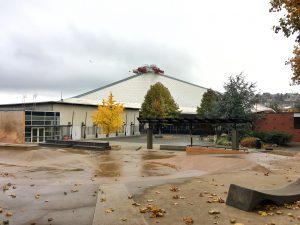 Word recently came in via our friends at Skate Like a Girl that not-even-ten-years-old-yet Seaskate #4 will be demolished as part of the future Key Arena upgrades by the Oak View Group (OVG).  In addition, the Skate Like a Girl headquarters office in the Blue Spruce building adjacent to Seaskate will also be demolished.  Why you ask? Well…in order to build a parking lot of course!

The Seattle Center told SLAG in a surprise meeting that Seaskate will not be relocated at the Seattle Center. They have offered SLAG an office on the Seattle Center campus, but the exact location or details have not been confirmed. The City of Seattle and the OVG are currently negotiating the terms of the Key Arena upgrades in a document called a Memorandum of Understanding (Agreement) that must be finalized by December 5th and is well on it’s way to meet that deadline.

Seattle-area skatepark advocates have reviewed the draft agreement and identified only a single clause regarding the Seaskate replacement.  This clause identifies a $1.5M total replacement budget for Seaskate, a maintenance facility for Seattle Center maintenance staff, and “other public amenities” impacted by the renovations. As we know from previous experience, this amount is wholly inadequate (The current incarnation of SeaSk8 cost over $3m). We also know that without a designated site for the replacement park, skateboarders are at risk of being marginalized once again to the outskirts of town and losing the only skatepark in Seattle’s urban core, not to mention the potential years of downtime that can straight up destroy a skatepark’s community.

In case you need a refresher course on what’s gone on with the last few versions of the Seattle Center skatepark, you can find some history here, here, and on this very website here. But this is just the last 10 years of history. This skatepark has been rebuilt FOUR TIMES, and there is a whole other generation of skaters and advocates that carried the torch for the first 10 years of it’s 20 year legacy.

So what can you do?

Write an email to these people telling them that they need to do the right thing and either leave the skatepark alone, or get crackin’ on a new site and budget that aren’t insulting and inadequate:

There will also be a meeting at 10:30am on November 16th at City Council chambers, where you can let your voice be heard and speak directly to the Committee on Civic Arenas who have the power to amend the MOU to include the right provisions. Demand that your city government protect skateboarders from being bulldozed by Tim Liewicki, Live Nation, and all the other big business interests that want to convert your public spaces into places they can charge you a premium to access!

UPDATE: This post originally stated that the group of musicians who sent a letter to the city were supporting the OVG plan, but they got back to me and they and clarified that in fact they were supporting Chris Hansen’s plan that does not impact the skatepark.