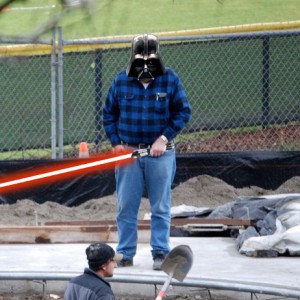 I said you’d be the first to know when I heard more news, but the WSB posted something yesterday (it’s worth reading, the comments are great).  To be honest, I was too frustrated and angry to write anything cogent.  I’ve been working within the Seattle public process as a volunteer skatepark advocate for almost 9 years now, and it’s definitely been getting better over the last few years.  Seattle Parks has gotten into the habit of building these parks on their own accord, which is a complete turnaround from trying to remove the Ballard Bowl and not replace it with anything.  But this recent Delridge stuff, my friends, is an unfortunate return to the classic Seattle Parks of 2004.  When autocratic decisions came from out of nowhere, seemed to conflict with previous Parks decisions, communication was vague, and somehow you always felt like you were getting schemed on.

Here’s the letter we got in response, for those who missed it:

Earlier today we decided to reject all bids for the Delridge Skatepark and rebid this project later this year or early next year for mid-2011 construction.

This decision has been reached after a review of the very restrictive supplemental bidder qualifications that were issued by addendum to the original project requirements.  These focused on volume of work rather than  specific construction requirements to complete the work, and are unnecessarily restrictive.  the project will be re-bid with clearer contractor qualification requirements outlined in the construction documents.  The design of the skatepark will not be changed.

Further, issuance of a construction contract involving excavation and concrete work at this time of year will be problematic was we are now ready to enter a wet rainy period for some time.  The construction window for such concrete work is already rapidly coming to an end for 2010 and an extremely wet winter is forecast.   Starting construction in the face of such would likely lead to unintended site costs due to wet conditions.

My first observation is that Mr. Stoops is standing behind the position that the qualifications were “very restrictive”.  It’s very telling that the word “restrictive” is even being used here.  These qualifications are only restrictive if you’re an unqualified contractor or a Parks Department that’s trying to hire one.  It’s an “empowering” set of qualifications for skateboarders, and skatepark design/build artisans.  It’s “defensive” for anyone who’s skated a park that’s been built by an unqualified builder.  It’s “comforting” for someone who is concerned about the quality of the product that their tax dollars are going toward.  The use of that word sheds light on where the Parks Department is coming from on this issue, that’s for sure.

We also sent Mr. Stoops five examples from other cities that were almost identical to the Delridge RFQ.  That should’ve at least been proof that these “restrictions” were not unprecedented.  We sent him a case study from one city where they wished they had “restricted” themselves to a more qualified contractor because their park is now needing repair less than 3 years after it was built.  We also detailed in a very long letter, all of the reasons why skateboarders feel the qualifications are warranted and fair.  I’m not sure why our opinions aren’t being addressed, but they aren’t, most certainly not in his written response.  I understand why these people need to be careful with what they say in public statements, but to not address the very well thought out case that we presented to them leaves too many questions unanswered, and leaves a group of passionate volunteers feeling grossly dismissed.

It’s also somewhat puzzling that he refers to a lack of “specific construction requirements” as another reason for this move, as the SPAC has consistently been told by Parks that we were not allowed to use specific construction requirements because it was too restrictive.  We’ve repeatedly tried to include more specific language in these RFQ documents, and have always been told that those types of requirements were rejected by the legal staff and higher-ups.  The existing and now-controversial qualification language is a product of several rounds of more specific language being rejected by Seattle Parks as inappropriate.  Every single RFQ that I’ve seen go through internal Seattle Parks iteration gets less specific, not more.

Hopefully these new “clearer” requirements will shine some light on what exactly is kosher when it comes to these requirements, because right now it’s completely unclear what is and what is not appropriate at this point.

But the subject of the second paragraph of Mr. Stoops’ letter is what you should really be worried about: schedule.

Is the Parks Department trying to torpedo the skatepark?

The issue of construction costing more during Winter doesn’t make sense, especially if they want to hire Sahli.  Sahli built Lower Woodland over the exact same seasonal timeframe, and even though it took forever, there were very few overruns if any.  I’m not sure what “unintended site costs” he’s referring to, but he only needs to look at Seattle Parks’ last Sahli skatepark project to refute his own assertion.

More worrisome is the bigger budget concerns throughout the city.  The City Council and Mayor are in the midst of a painful budgeting process right now that’s producing some unsavory “solutions”, like laying off librarians and shutting down wading pools to pinch pennies.  Parks staff are already taking furlow days, and sources say that some Parks folks have already been notified of impending layoffs.  So I’m sure it’s irritating to someone who’s facing these difficulties on a daily basis to hear some skateboarders advocate for spending $70K on quality craftsmanship.  But delaying the project essentially leaves money lying around, increasing the risk to the project itself, and threatening a much larger investment of everyone’s time, community effort, and the future value of having a skatepark in a community that really needs it.  So in essence, to save $70K, Mr. Stoops is risking the entire budget of the project ($750K + volunteer time, effort, delays, etc…) by allowing it to linger around without a contractor for another 4-5 months.

In the bigger picture, can this project really suffer another delay?  My first post about this project was on June 5th, 2008.  Since then the funding has disappeared and reappeared once already.  So based on Mr. Stoops’ estimated timeline, this project will have taken over three years to complete, and this is in the most supportive community a Seattle skatepark has ever been introduced to.  I truly think the bigger picture is lost on people like Mr. Stoops and the people he reports to.  Sometimes they seem to lose sight of the impact they’re having on real people’s lives.  This isn’t just another project on a planning roadmap to the kids who live near the site and came to all the meetings.  This is something they go to sleep at night thinking about.   A kid that was in 9th grade when the first meeting happened will almost be graduating from high school when the park is finished.

The estimated date we got back for rescheduling, re-budgeting, and re-writing the qualifications is October 25th.  Watch this space for more details.