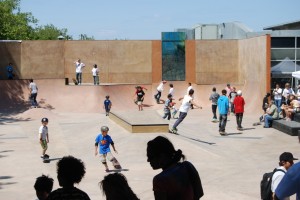 When the SeaSk8 replacement site was being pushed around town, one of the arguments against putting it on the Seattle Center campus was that it would be susceptible to the festival organizers.  In fact, some of the most powerful lobbying against a Seattle Center location came from the big three:  Bumbershoot, The Bite of Seattle, and The Folklife Festival.

Ever since the decision was made by the City Council to locate the park on Seattle Center campus, skatepark advocates have been working diligently with the Seattle Center management and the festival organizers, to come up with a situation that works for all parties.  Everything was going smoothly until a few weeks ago, when we got word that the park would be closed for 14 days around Bumbershoot due to safety concerns.  There’s an important campus access road at the corner of 2nd and Thomas, which also happens to be the entrance to the skatepark.  Oops.

What’s interesting about this is that outside City Council chambers the day the site decision was made, skatepark advocates and representatives from One Reel (the concert promotions company that produces Bumbershoot) had a nice little chat about the exciting possibilities of some amazing skate jams with bands during Bumbershoot.  We even got a nice email the next day.  It wasn’t the optimal outcome for them, but they were going to move forward and agreed to involve the skate community in future plans for some killer skate events.  During the SeaSk8 design meetings, One Reel reps were at the table and had plenty of opportunity to pipe up about their plan to shut down the skatepark for two weeks during some of the best weather we get all year.

Alas, two weeks ago, SPAC chair Ryan Barth received a phone call from Seattle Center staff who had in turn received word from One Reel that they would be locking down the skatepark, and were genuinely concerned about finding a solution that benefitted both parties.

So after much cajoling and negotiation, this is the statement from Seattle Center regarding what will happen to the skatepark during Bumbershoot:

On August 27, One Reel will construct a fence around most of the skate park (For logistical issues, the fence line will run along the old Pav A footprint line which means the overhang will be on the Bumbershoot side). The fence will continue South to the new guard shack. Entry to the skate park will remain open to the public via Thomas (West of the
new guard shack).

An admissions guard will be hired during busy load in activity to ensure safety to the public.

On the three festival dates (Sep 5-7) the skate park will be within the Bumbershoot fence line but still accessible to skaters. Skateboards will be allowed into the festival (except stadium) which is consistent with previous years festival policy. The entry to the skate park during the festival will move North toward the ATM. The Pavilion Courtyard will remain fenced for production space.

When the perimeter fences go down at the end of the festival Monday night, the fence will revert to the load in configuration. With admissions assisting with skater safety.

No later than September 11 all fences will be removed and the area around skate park will return to normal operations.

Now, keep in mind, the original plan was to close the skatepark for something like 45 days during the Summer months for all the festivals, but Folklife and The Bite of Seattle have since seen the light (and perhaps the X Games) and have decided to include skateboarding activities in their events.  Let’s hope that next year the One Reel folks either figure out a way to program some killer skate action in the park, or simply configure the fencing in a way that allows the park to stay open to non-paying customers (preferred).